China’s shipowners are shunning Iran’s oil, while the OPEC producer is using its own tankers to supply top customers as impending U.S. sanctions threaten to disrupt global crude trade.

All 17 ships used to carry oil from the Islamic Republic to China in July and August are owned by the state-run National Iranian Tanker Co., according to ship-tracking data compiled by Bloomberg.

By contrast, almost half the vessels that made the journey in the prior three months were owned by companies in the North Asian nation, the data show.

The shift shows how trade is being affected even before U.S. sanctions targeting Iran’s crude exports snap back into effect in early November.

The nation’s outflow has fallen after American President Donald Trump in May pulled out of a 2015 deal between the Persian Gulf state and world powers that had eased oil restrictions in exchange for curbs on its nuclear program.

While Iran’s fleet of very large crude carriers, or VLCCs, and Suezmax tankers — the largest that can fit fully-laden through the Suez Canal — has always played an important role in delivering Iranian crude to customers, it is increasing as insurers and international shipping companies react to the impending renewal of sanctions.

Meanwhile, China, the world’s biggest oil importer and Iran’s biggest customer, is said to have rejected a U.S. request to halt purchases from the producer, dealing a blow to Trump’s efforts to isolate the Middle East nation and force it into negotiations.

Still, some other countries including South Korea and Japan are reducing shipments even before the November deadline to avoid the risk of buyers losing access to the American financial system.

Moreover, oil-tanker owners are seen staying away from hauling Iranian supplies because of the risk of being cut off from the booming business of transporting crude pumped from shale fields in Texas or wells in the Gulf of Mexico. This has spurred the Middle East producer to offer its own vessels to ferry cargoes to its customers.

The top-two state refiners in India, another major buyer of Iranian oil, are receiving crude delivered in tankers owned and insured by the Persian Gulf nation. The Middle East nation offered supplies on a delivered basis, as well as insurance after re-insurers declined to underwrite Iranian crude. 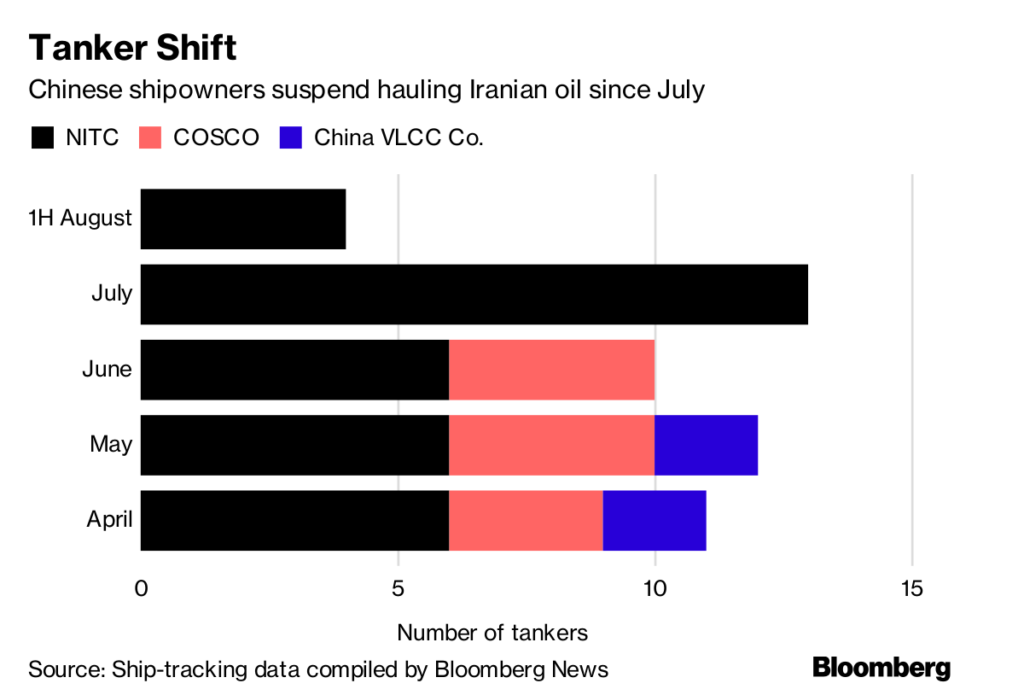