Explosives could still have a big part to play in cutting costs, saving time and reducing the environmental impact of decommissioning, an engineer has said.

David Lindsay, who worked in oil and gas as an explosives engineer for over a decade, is calling for an open discussion about reinstating their use.

“We’re saying: at least give us a chance to speak to you, then make your decision,” Mr Lindsay said. “We’re hearing people in the industry say ‘we can’t use explosives unless we’ve exhausted every other cutting method’. Why would you leave something that works as the last resort?”

“We want to try and educate people a bit more. We want to engage with the environmental bodies. We want to make people realise: don’t be afraid to use explosives.

“I’m not saying that the way we did it 20 years ago was perfect – it worked – but I’m sure it could be improved. We know it works, it’s got a great track record but how do we make it work better?”

Mr Lindsay, also a former army bomb disposal specialist, said he was “probably responsible for almost every well that was removed within the North Sea using explosives” between 1997 and 2007.

He’s dismayed by the reluctance of people within the industry to engage in a conversation about the renewed use of explosives in severing decommissioned wells.

He said: “It’s only controversial if people don’t understand what’s behind it. It’s about using what is going to be the most cost effective technology that’s available to you.

“If you take other things into account in terms of vessel time and exposure to risk and if you want to reduce the time it takes to perform that operation with one technique versus another then you can’t ignore that.”

When a decommissioned well has been plugged and abandoned the process naturally comes to the removal phase with the well having to be severed at least 3 metres below the seabed so as not to leave a snagging hazard for fishing nets.

A charge would be detonated, severing the well and allowing the wellhead to be pulled free of the seabed.

The practice has suffered something of a public relations downturn in recent years.

Mr Lindsay, who is part of a group of specialists from the Institute of Explosives Engineers, said: “There has been a perception that the damaging effects extend way beyond where the actual charge is going off. But in effect the damage is probably limited to a radius of 125 metres from where the charge goes off, certainly in the case of a wellhead severance charge.”

“Around the mid-2000s when hydro-abrasive seemed to develop and the use of explosives dwindled away it was almost as if no one challenged it, people felt like we’d moved on from using explosives. There was such a voice gathering within the industry that it was no longer acceptable, that it wouldn’t be permitted.

“Having spoken to the UK Department for Business, Energy and Industrial Strategy; that is simply not the case. It’s almost a symbolic act by an operator to say ‘we no longer use explosives’.” 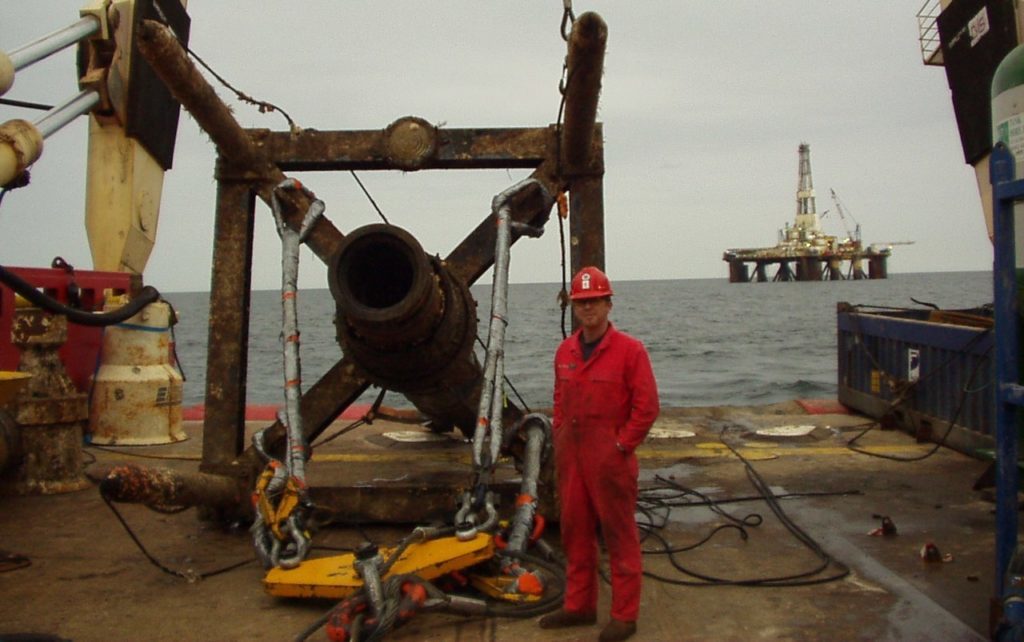 David Lindsay and a recovered wellhead from an early decom campaign.